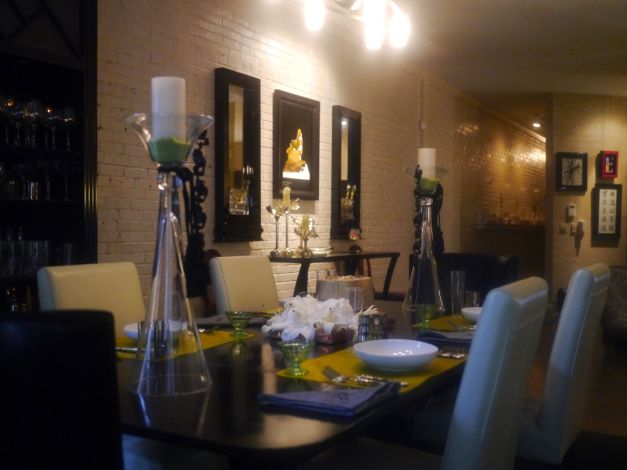 Sunday is a wonderful day of the week. To claim it as a real day of rest offers the opportunity to relax and enjoy personal time or gather with friends and family. Therefore, it often arbitrarily becomes a day for memorable meals.  I’m not a breakfast fan.  However, Brandt loves breakfast…7/365…he doesn’t really get going without an egg.  Me…not so much.  Yet on Sundays or when traveling I do enjoy a pretty brunch; ’round about 11:30. Saturday, we were fortunate to visit Theatre Memphis and meet the cast and crew of A Chorus Line set to open March 8 with a Gala featuring the incomparable Donna McKechnie, Cassie from the original 1975 Broadway cast. Brandt, also in that cast spoke to the Theatre Memphis “kids” about his ACL experience.  They were all so full of energy it was hard not to fall in love with each of them.  One of my favorite things that Brandt does is invite people to enjoy a meal with us…then, he turns to me and says “is that okay, honey”.  It’s just adorable. Well, he invited the director Josh Walden and his assistant Adam Lendermon to Sunday Brunch.

I set a very generic table.  I really had no idea what I was going to prepare because we briefly met these guys and didn’t talk about their dietary restrictions. I was thinking I would do a one dish meal and either a salad or light dessert.  So I used what would probably be called a soup or pasta bowl and for the side dish I used green depression glass stemmed bowls that were “Mother Pearl’s” mothers…my mother’s grand mother. If had ever had a daughter I would name her Mother Pearl Pierce. 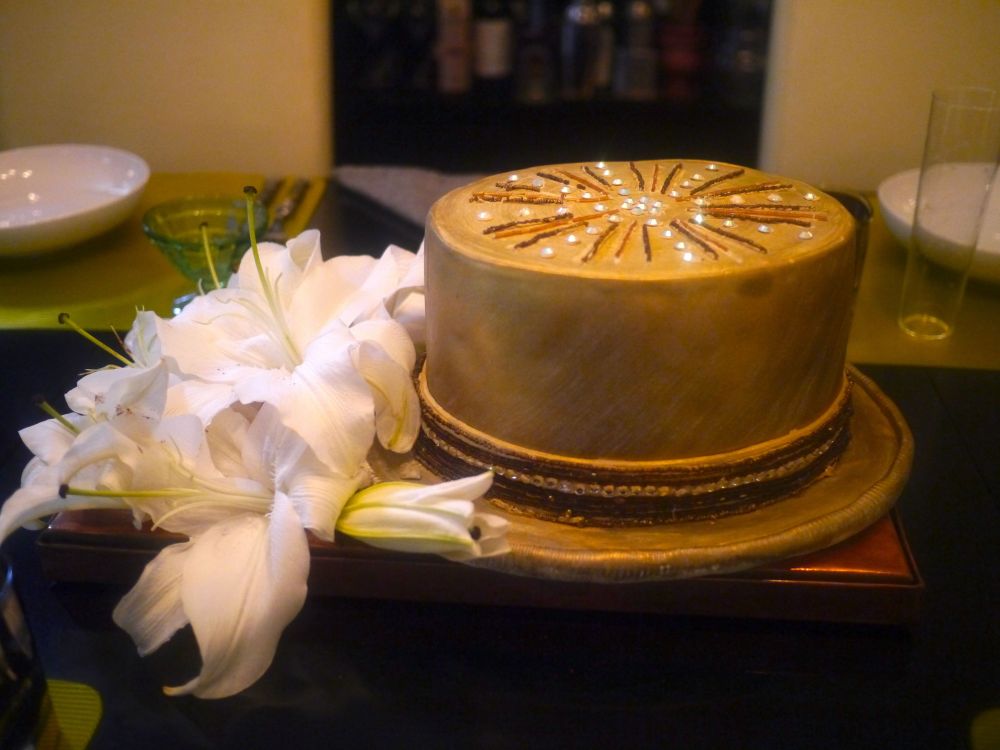 For Brandt’s 60th birthday I had Miss Muff’n in Germantown do a large sheet cake with a three-dimensional 60 on one end.  On the other end she did an exact replica of the ACL finale hat in fondant complete with real seed beads and rhinestones.  I pulled that out of our display shelves and yet again repurposed the enchantment lilies you’ve seen three times now. The flowers are in an antique bar tray.  You see them in bars now and they’re rubber. This is copper from England that I found at a wonderful shop of treasures in New Braunfels, TX.  It’s meant to catch over-pours but I actually fill it with water and use it as a flower vessel.

Inspired by the jar of magic we had at David Burke Kitchen I created a starter.  I took a ring mole and layered pepper jam, creamed ricotta and artichoke relish.  Brandt toasted some Tuscan bread for me and on their arrival we enjoyed this with Mimosas. 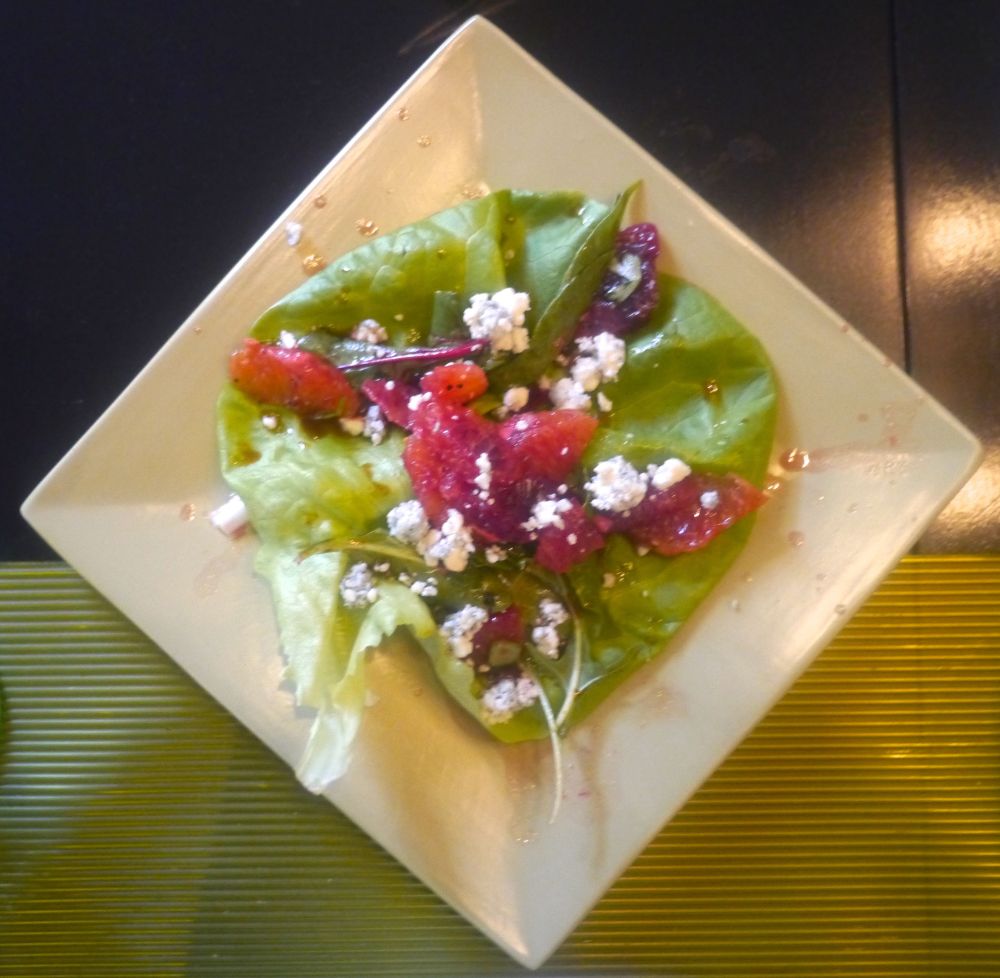 Friday, I was stunned when Kroger had blood oranges.  I decided I would do a salad with them just in case they came in and said they were vegetarian. I supremed the oranges, tossed them with fresh herbs, pomegranate molasses, olive oil, salt and pepper and scattered them on a leaf of Butter Lettuce then sprinkled the plate with Maytag Blue Cheese.

Brandt requested biscuits and I felt I was safe doing breakfast potatoes.  Whole Foods has been carrying heirloom potatoes. They are about the size of a grape and are a mixed bag of white, red and blue potatoes.  They look beautiful on a plate and also make a very appealing potato salad.  I had both the biscuits and potatoes in a warm oven.  I was thinking Sara Beth’s Smoked Salmon  and Cream Cheese Scramble.  I asked if they ate Salmon and Adam did not.  I love being a short order cook….really.  The guests always think they are putting me out but it brings me great joy to make individual dishes that meet the needs of each guest.  I had some Prosciutto left from the Valentines Dinner so I used that in place of the Salmon…done!!! 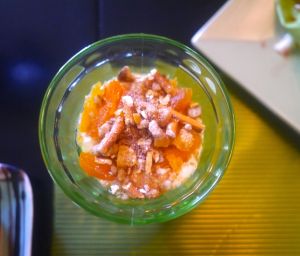 Although I did the salad I still wanted to use the depression glass.  I decided to do the light dessert, as well.  I placed a scoop of plain Greek yogurt in the bowl and drizzled it with honey. Then I topped it with slivers of dried apricots and made a crumble of pretzels, corn flakes, walnuts, brown sugar and cinnamon.  It was the perfect touch at the end of the meal. 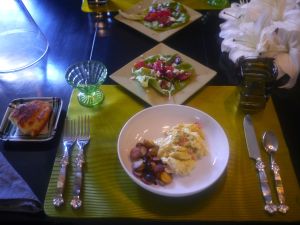 I must say that it takes a bit of effort to get up and get everything going for brunch. However, it’s very enjoyable to have a meal of this nature and then have the rest of the day to relax…and that’s exactly what we did. We drank Mimosas until the bottle was empty and moved to coffee.  Stories of old and new Broadway were shared and new friendships were ignited. It’s a real joy for both of us to visit with younger people who are on their own journey along some of the same paths we’ve traveled.  Our past and love for each other inspires them and their energy and spirit invigorates us.  It was a joy to have them in our home and upon departure their warm embrace let us know they felt the house was lovely and a good time was had by all. 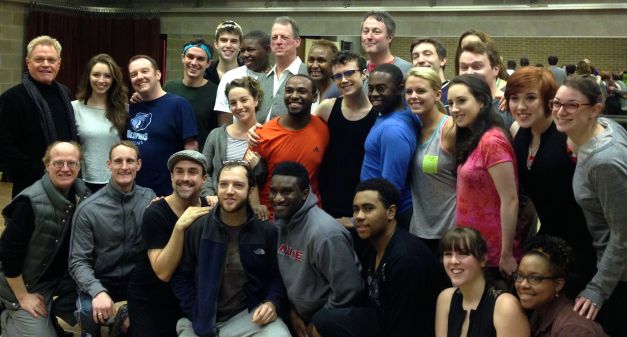